What do an Indigenous grandmother, a Rod Stewart look alike, and a gritty little honky tonk bar all
have in common? They're all Winnipeg Famous.

Over 5 episodes, CBC Manitoba's Bridget Forbes shares the stories of the whimsical and wonderful people who make up the quirky culture at the heart of Canada's middle province.

We’d love to hear your thoughts about the podcast.
Tag us @CBCManitoba on social media and make sure to include the hashtag
#WinnipegFamous. 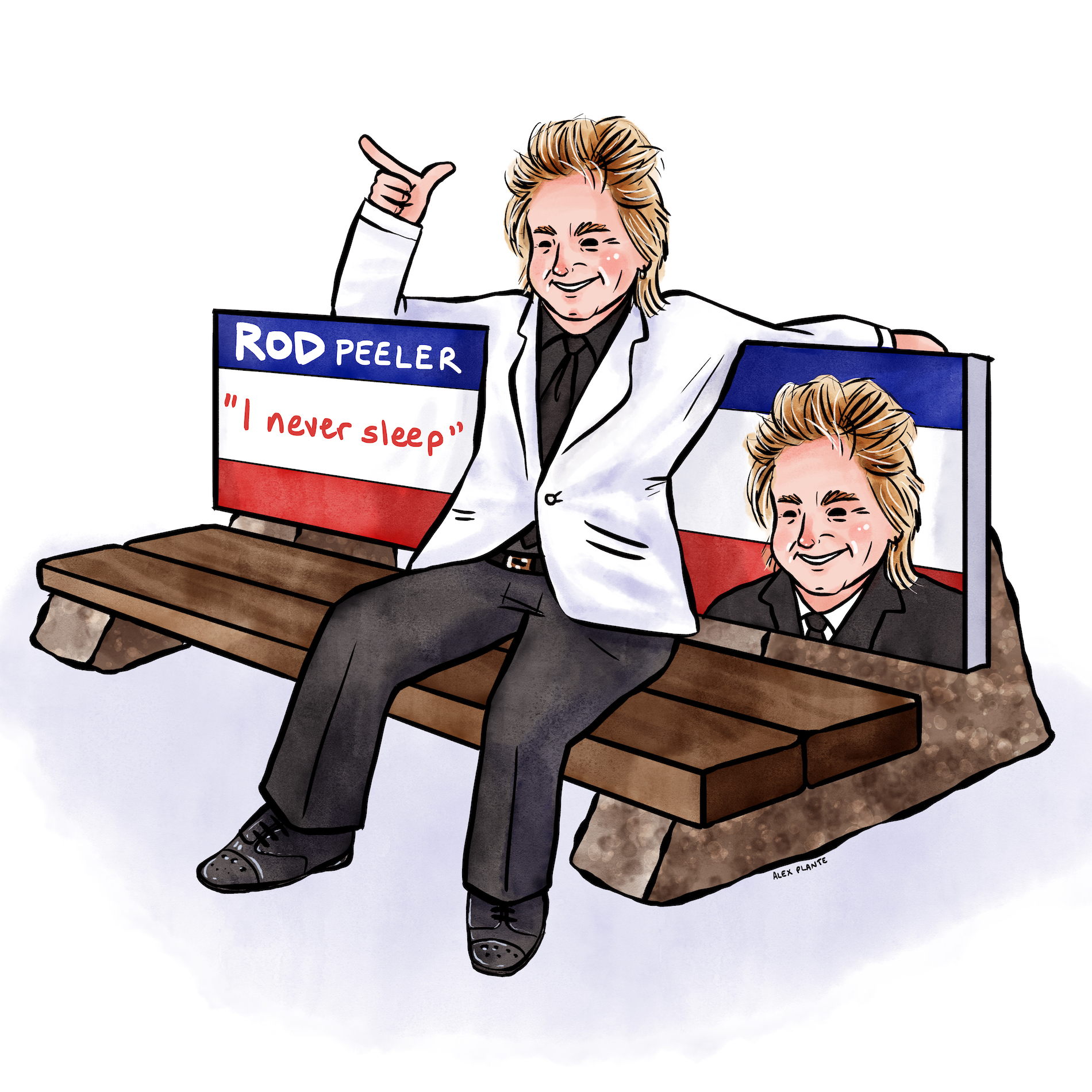 Rod Peeler: The Man Behind the Bus Bench

He looks like Rod Stewart, claims to never sleep, and once had to hire a detective because teenage pranks got out of control. So how did a local realtor become Winnipeg Famous, and what personal challenges drove this larger than life character to put his face all over the city? 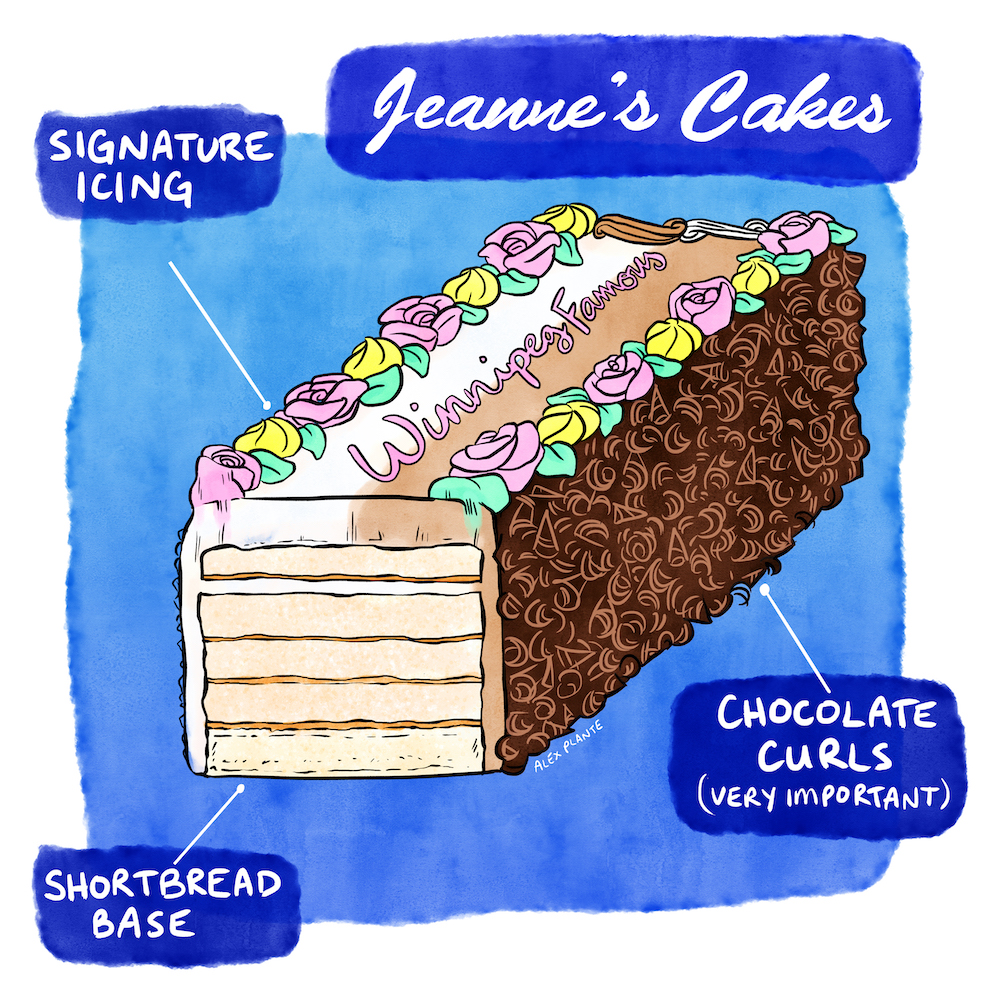 You either love it, or you love to hate it! A simple layer cake made Jeanne's Bakery 'Winnipeg Famous', but the family that built the business over three generations is more mysterious. Who was Jeanne anyway? And why did her grandson sell a successful business that had been in the family for 65 years? It turns out the reason is tragic. 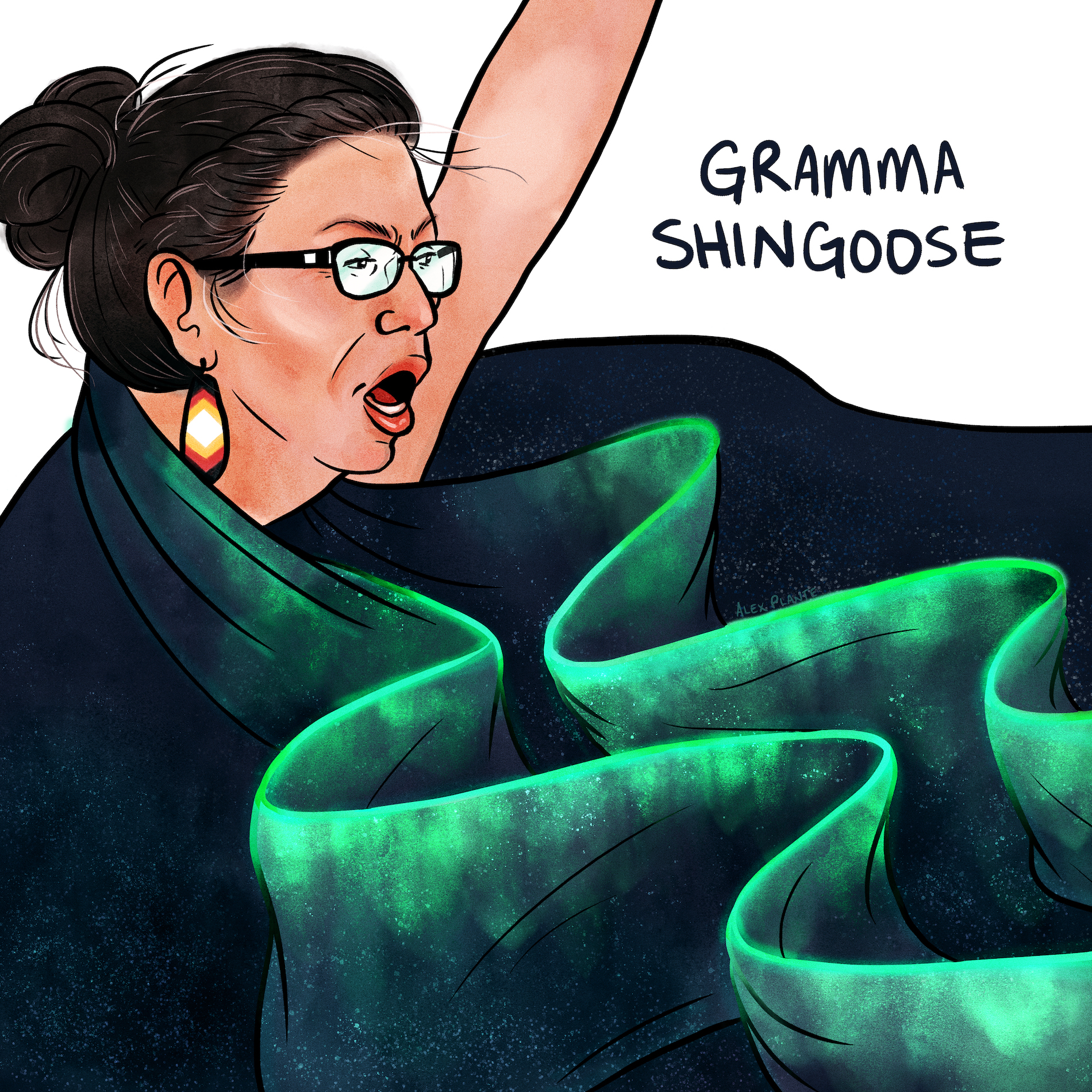 When there's an important event in Winnipeg's Indigenous community, Gerry 'Gramma' Shingoose is there - often at the front - with a prayer, a drum, and exactly the right words. But Gramma Shingoose says her connection to her culture was severed, once by residential school and once by grief. So how did she find her strength and her way back to become the respected elder she is today? 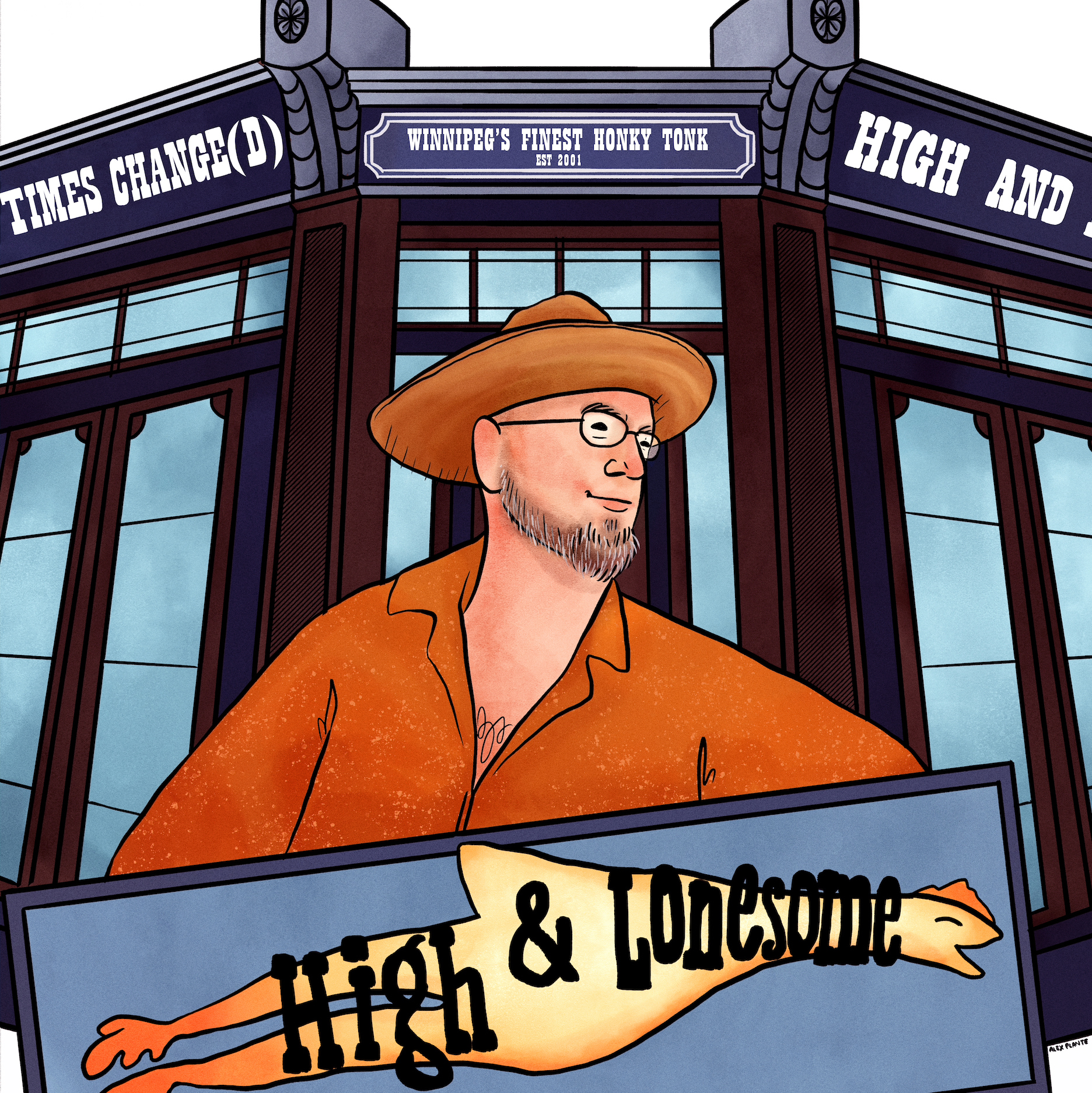 John Scoles walked into a bar with a broken heart nearly 30 years ago. Little did he know it would be the beginning of a new love affair that would give birth to the Times Changed High and Lonesome Club. In Part One learn how he transformed the dive bar into a favourite stage for musicians, helped energize a scene, then walked away in protest, to everyone's dismay.

Why does it matter that John Scoles' triumphant return to the bar is on the anniversary of the sinking of the Titanic?
Why was a successful beloved bar that packs in crowds most nights, always at risk of closing? And how did love help save the day? Find out in Part 2. 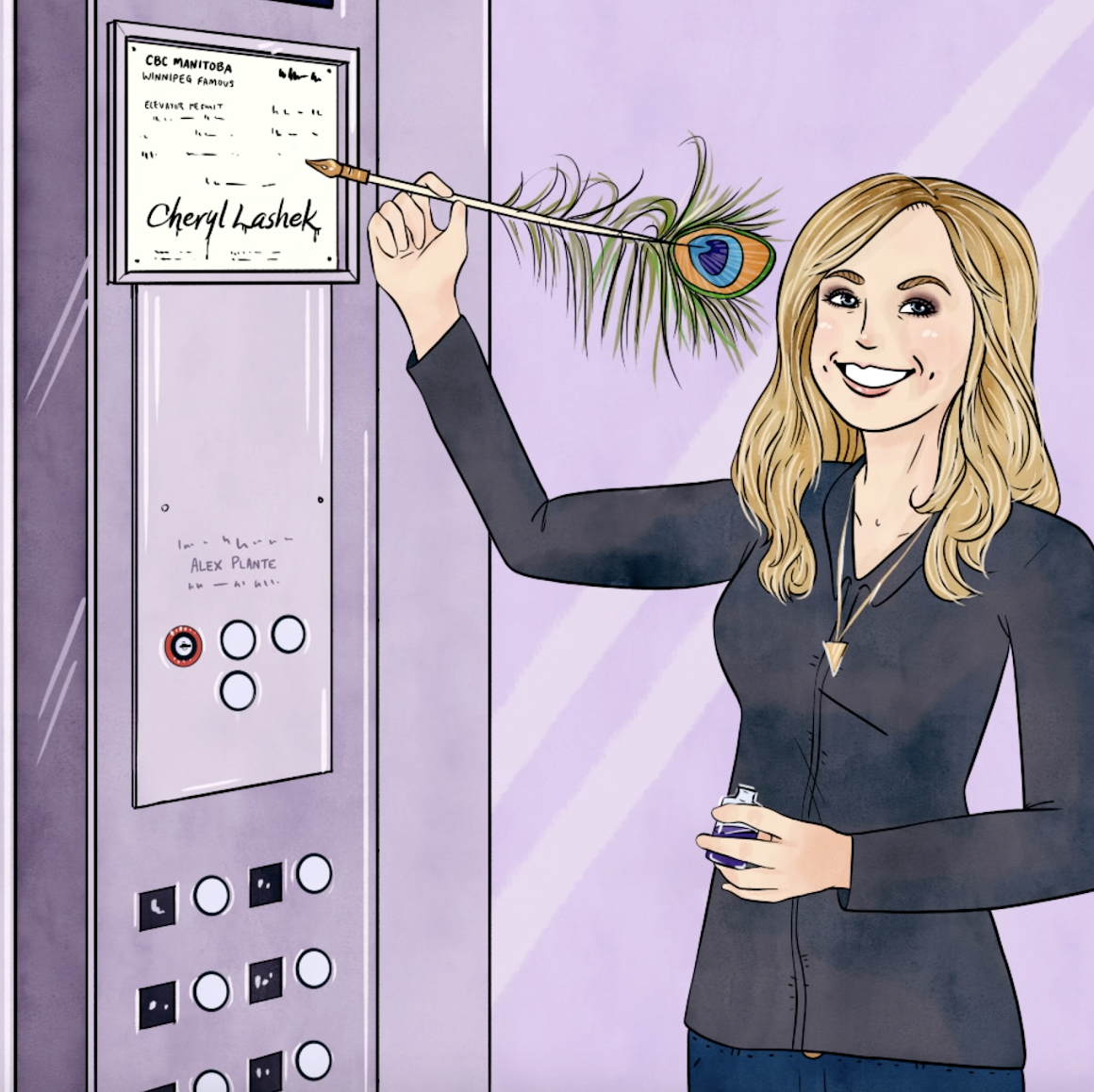 'Waiting for the Elevator Lady' traces how Cheryl Lashek became Winnipeg Famous without ever trying. Meet the artists and Winnipeggers who have created tributes to the elusive mechanical engineer whose signature graces every elevator permit in Manitoba. Follow host Bridget Forbes on her quest to land an interview with the public servant who rarely speaks, and tests the theory that in Winnipeg, it’s not six degrees of separation, it’s more like three.

In 'Ladies and Gentlemen: The real Cheryl Lashek' we finally hear from the woman herself! What does the civil servant, Cheryl Lashek, think of the notoriety she never sought? Discover the secret behind her signature. Find out what happened to her in grade seven that blew her mind and changed her destiny. Hear how she tries to encourage young women to become engineers, a field where only 14% of practicing professionals are female.

About the series Winnipeg Famous

CBC Manitoba presents Winnipeg Famous with Bridget Forbes. A five-part series of candid conversations with some of Winnipeg’s most notable characters.
Join Bridget for a behind-the-scenes look at the folklore celebrating the people that make Winnipeg weird and wonderful.
Winnipeg Famous celebrates the whimsical and wacky stories that define the experiences of Canada’s middle province.

I am NOT Winnipeg Famous, but I call strangers for a living, so I might have met you on the phone. I’m pretty sure that in Winnipeg, it’s not six degrees of separation, it’s three. So if I haven’t phoned you, (or your neighbour, or your cousin), there are a few other ways you and I, dear Winnipegger, may have already connected.

If you’re a listener to CBC Manitoba radio, you’ve heard my work on Information Radio, Radio Noon, Up To Speed and the Weekend Morning Show. I told stories, produced, and directed all of those shows, before making the switch to the national CBC Radio show, Now or Never. I’ve also worked for the I-Team and the television show Living Winnipeg.

Before joining CBC, I worked on award winning productions in independent film and television with Les Productions Rivard (shout out to St Boniface!). I went to Kelvin High School, River Heights Junior High, and École Riverview (Fort Rouge!). I went away for university and stayed away for wild adventures, but lived like a student in Osborne Village when I came back.

As a teen I took the bus to hang out with my best friends from the North End at Garden City Shopping Centre and Portage Place. These days we meet at The Forks or in the Exchange. I’ve stood in lots of lines at the BDI, performed at Folklorama as a kid (at the Ukrainian Pavilion - but I’m not Ukranian), and love the Winnipeg Folk Festival more than Christmas. I smile and say hello to people I walk past on the street.

This podcast is my love letter to the people of the city where I was born and raised, and chose to come home to. I hope that by learning the stories behind the faces we think we know, we all become even more connected. 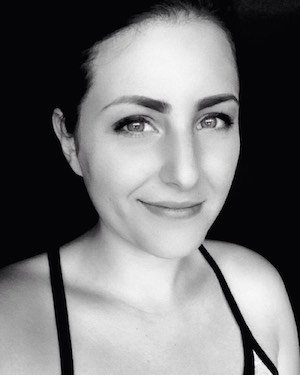 Alex Plante is a Winnipeg-based artist known for her whimsical, charming and fun illustrations that capture the life and lives of the people in our province. She has been painting and illustrating for more than 15 years. She also loves writing, creating comics, singing and acting. Alex graduated with a filmmaking degree from the University of Winnipeg in 2016.

For CBC’s new Winnipeg Famous podcast, Alex drew four original illustrations based on the characters and themes of each episode: Rod Peeler, Jeanne’s Cake, Gramma Shingoose, and John Scoles/ Times Change(d) High and Lonesome Club. Alex then created a short, two-minute long time lapse video of the creation of her illustration which was set to audio stories told in each episode of Winnipeg Famous. 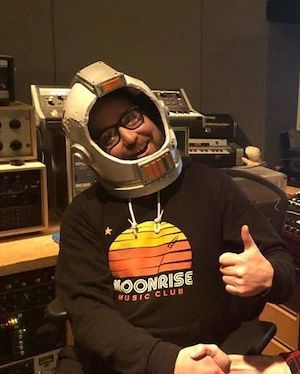 Rusty Matyas is a multi-instrumentalist, producer and podcast fan from Winnipeg, Manitoba. His contributions to the world of music include involvement with the Waking Eyes, Imaginary Cities, the Weakerthans, the Sheepdogs, and many more. His proudest achievement is re- recording Bohemian Rhapsody in its entirety - in Klingon. His actual proudest achievement is creating the theme song for this podcast. He works regularly on music productions with his partner Lloyd Peterson under the name Moonrise Music Club.